While the world focuses on the humanitarian crisis in Ukraine, towards which Helvetas is also contributing support, other crises have not gone away. Indeed, there are at least eight other humanitarian crises ongoing at present, many of which have dropped from the media’s attention. One is a major drought in the Horn of Africa that is having drastic consequences on the lives of pastoralist communities.

As one travels southeast through Ethiopia’s Oromia Zone, heading towards the Kenyan border, the landscape becomes progressively drier. Dark brown soil sprouting new shoots of the traditional Ethiopian crop of teff gives way to uncultivated, rust-red lateritic ground. The vegetation becomes more spiny and drably colored, with only the umbrella-shaped Acacia trees in green leaf. Gusts of wind whip up clouds of red dust into the air. Herds of gaunt livestock roam the land; donkeys laden with yellow jerry cans of water plod along the roadside, often accompanied by women carrying at least one 40-liter container themselves. This is the current situation in the Borana region, as faced by its people of the same name: a failure of the rains for three years out of the last five.

Since September 2016, the Swiss Agency for Cooperation and Development (SDC) Natural Resource Management (NRM) Borana project has been working to build greater resilience to the changing climate of the area, reaching over 12,120 households. The project is implemented by Helvetas in consortium with its Alliance 2015 partner Welt Hunger Hilfe (WHH), and aims to improve access to both water and fodder or rangeland resources.

It is set in the context of government and external NGO efforts to support services within fixed administrative boundaries, and a traditional way of life based on nomadic pastoralism, under which herds of livestock are moved seasonally between different grazing areas, following long-held indigenous knowledge about the grazing characteristics of each location. Population pressure—both of people and livestock—combined with increasingly frequent droughts have rendered the current system of livestock management unsustainable. This is not an easy problem to address; modern and traditional thinking has sometimes clashed, with government officers and traditional leaders both seeking to exert their decision-making power. The project has therefore given special attention to facilitating close collaboration between government authorities, traditional leaders, NGOs active in the area, and women representatives in planning and implementing interventions and ensuring a common understanding.

“In the past there was a conflict between the government and NGOs on one side and the traditional authorities on the other. The government authorities didn’t respect the system, and the NGOs often came and listened only to a few people, not everyone. So, for example, the government dug a well in an area that was dry season grazing land used by people from three kebeles. People came in to settle by the water, and the land got quickly eroded so it was no use for dry season grazing. This created conflict. Since the project over the last two years consulted with the traditional authorities in all the relevant communities, things are much better,” Golo Gutu, Konfi (well founder), Gayo kebele.

Water and fodder are the two essential and interlinked ingredients of pastoralist livelihoods; both are in short supply during periods of drought. Surviving such difficult times is not a new challenge for the Borana people, who have well-developed coping mechanisms. However, what is new is the frequency and severity with which droughts are occurring—exactly in line with the scientific predictions of the Intergovernmental Panel on Climate Change. This article focuses on one project intervention: improving equitable access to water through the installation of solar pumps.

Traditionally, the Borana people rely on water from two main sources: open ponds and deep, hand-dug wells known as Elas. Hand pumps are another source of domestic water and have been installed in villages by various agencies, although not all are functioning. Ponds and Elas remain crucial, especially for livestock. The ponds are relatively shallow and easily accessed by cattle and people, being sometimes of natural origin but generally enhanced through excavation and de-silting. Indeed, the project has supported the de-silting and enlargement of numerous ponds. The Elas, which can reach over 100 meters in depth, have been dug out through labor-intensive efforts and comprise a passageway down to a watering area or trough, fed by a spring. Livestock and people walk down to drink.

Each Ela has a founder or Konfi (who may be the descendant of the original founder) from whom outsiders wishing to take water must seek permission. Traditionally, access to water is never denied—but it is regulated. Guided by the Konfi, an assembly of water users (Kora Ela) meets to agree rules of use and arbitrate any disputes, while an elected overseer, Aba Herega, ensures fair distribution, aided by several Abba Guyyas who keep track on the ground.

In times of drought, when the water table drops, water must be hauled up manually in buckets or jerry cans by a chain of people and tipped into the watering area or trough. This is shown in these video clips, taken in early March 2022. Often the men hauling the water sing in unison to keep up their work. 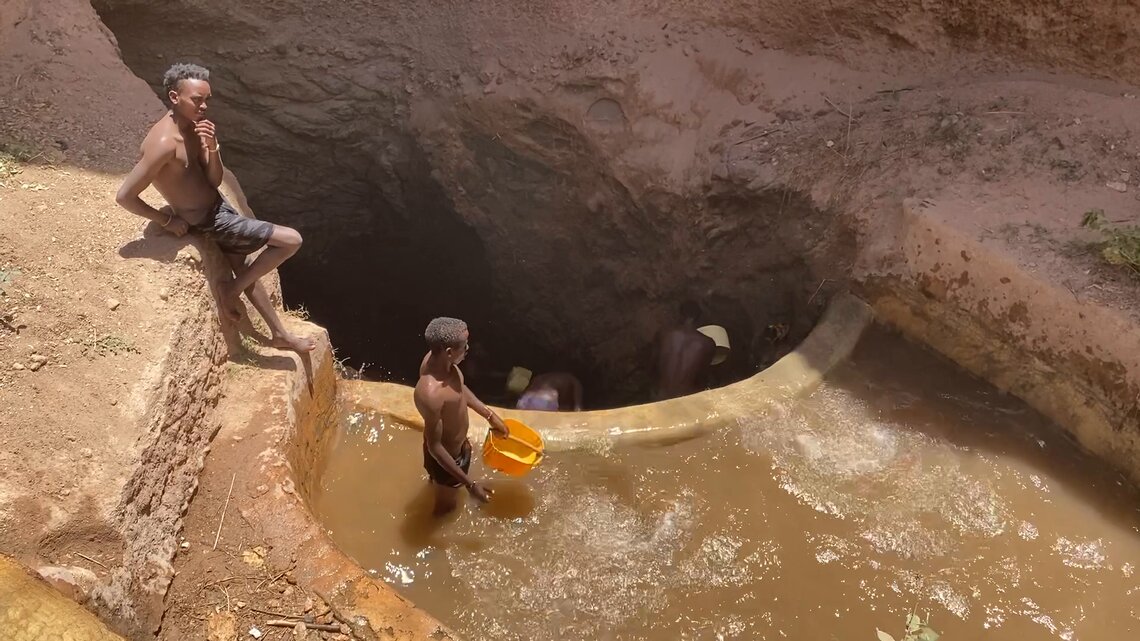 Hauling water from the bottom up

Hauling water to the animals

The second video also shows how thin the cattle have become—emaciated by the lack of fodder. Once they reach this state, they are generally too weak to access such wells. The animals simply collapse when trying to return up the passageway to the surface. The Ela shown in the clip is currently the only one out of the 12 Elas in Gayo kebele that can be used by cattle due to its relatively shallow, renovated passageway. According to Garbole Dadacha, the Aba Herega,

“In the old days, before the renovations were done, 12 people had to stand in line to hand up the water. But now that it is more accessible, four or six people can do that work.”

The NRM Borana Project has installed solar pumps for three Elas in three different pilot kebeles, bringing Ela water up to the surface for distribution and thus avoiding the use of the steep passageways. At the surface, there is a drinking water collection point for people where the water has been passed through a filter, and a separate area for livestock with watering troughs. The installation of the pump and solar panels was initially considered controversial since it changed the appearance and functioning of a well-established traditional system. However, in times of major drought, the solar pumps are literally life-saving. The solar-powered Ela in Dhas kebele, shown in the photos and another video below, is currently the only Ela in the area that can be accessed by livestock. Known as the Gadulticha Ela, it is reportedly being used by 1,860 households at present.

Importantly, the traditional system of Ela management has been retained; there is still a Kora Ela, and two Aba Heregas monitor water use. According to the Konfi, Molu Duba, the community chose the Gadulticha Ela for the solar pump intervention because it is the deepest, steepest and most reliable source among all the wells in the area. The pump was installed three years ago and has functioned reliably on all but two occasions, when outside support from government technical officers was needed for repairs. For the rest of the time, the Aba Heregas have been able to keep the system going, based on the training they received on regular operation and maintenance. A maintenance fund, fed by contributions made by Ela users, has been established to pay for small replacement parts. Contributions come to about USD 0.02 per jerry can of water for human consumption, and USDC 0.01 per head of cattle. Households that cannot afford even such a small sum are, by common agreement, exempted. 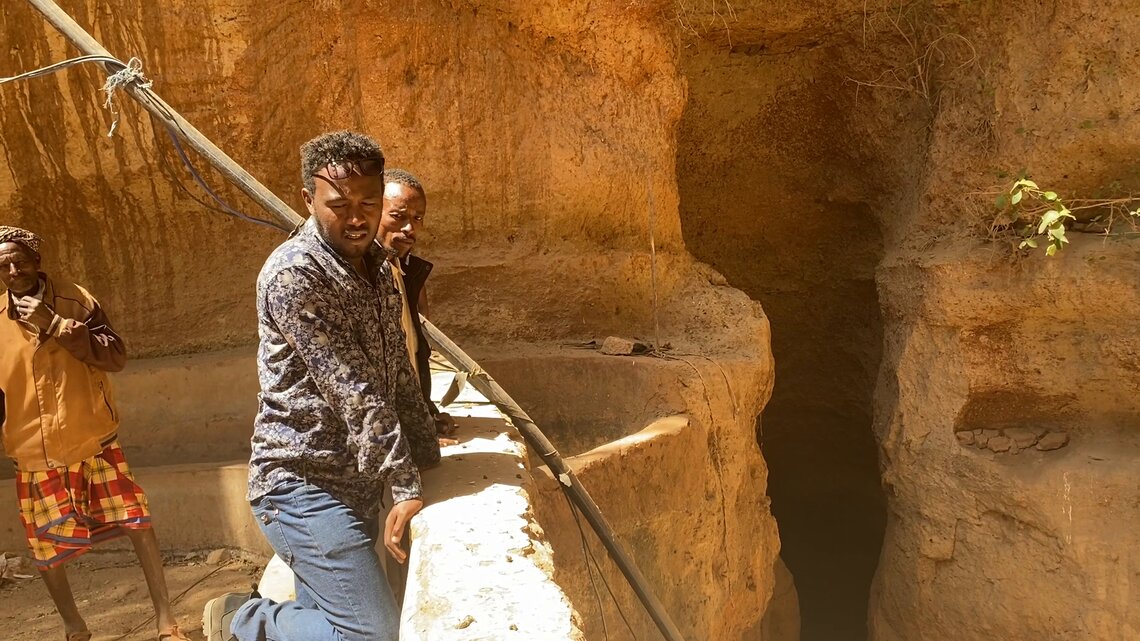 The video below shows the Aba Herega Nura Tadicha at work. Nura does not have an easy task in ensuring that all people and animals visiting the Ela get a fair chance to take water or drink, but even in this short video it is obvious that he keeps a careful eye on everything going on, regulating the water taken.

The current drought has caused many Borana people to wonder about their future. They are proud of their pastoralist heritage and all the customs associated with it. At the same time, many of them expressed fears for their survival as a community. This was well articulated by one woman in a meeting in Gayo kebele.

“Right now our animals are dying. In the worst-case scenario, if the rains don’t come, we will have nothing. We are pastoralists. We are not educated. Our livestock are our bank; if we lose them, we are nothing. Even if we do business, it is through livestock. And even if the rains do come, we are not sure that our animals will survive since that is the time that many die of cold because they are so weak. All I can do is pray to God.” Tume Jirma, Gayo kebele.

Tume Jirma’s words show both the importance of cattle to the Borana, and a realisation that the current way of life is breaking down. What she did not do was to attribute blame, although in terms of climate justice it is certainly not the Borana who have a large carbon footprint (however many cattle they might still own). One practice established in the first phase of the NRM Borana project has specific promise for forward planning. This is a joint meeting at the beginning of each year of meteorologists, other relevant government staff, traditional forecasters and NGOs to assess the likely weather conditions and plan accordingly. Thus, for example, in years of drought the emphasis could be on deep well renovation (potentially with solar pumps), and early sales of cattle to get a good price, using the money to buy fodder for the remaining herd. In years of better rains, interventions could focus on pond de-silting (to maximise water capture), fodder production including hay baling, and milk production. As the project prepares for a second phase, it can build on this existing experience in developing different yearly weather scenarios and tailoring interventions accordingly.

How Helvetas Supports People in Ethiopia

Learn how farming families in Ethiopia cope with climate change and how young people improve their income through training.